Look on the Sunny Side! Optimism Increases as People Get Older

Do you think your future is full of possibility or filled with potential danger? Whether you’re an optimist or a pessimist is more than a matter of perspective—it has important consequences. Decades of research have shown that people who are more optimistic tend to be happier and healthier, live longer, and have better relationships.

But there’s no need to be pessimistic, pessimists. Research has found that our personalities continue to develop across the lifespan. Just because you’re down on the world today doesn’t condemn you to a lifetime of negativity. What’s unclear, however, is how people tend to change as they age. Do we learn to look on the sunny side as we get older, or is optimism tempered by life experience?

To address this question, we interviewed over a thousand Mexican-American parents about their optimism four times over a seven-year period. We asked them to rate how much they agreed with statements such as “In uncertain times, I usually expect the best.” Based on their answers, we calculated an optimism score for each person and tracked how this score changed over time.

Because the parents in our study were a variety of ages, we chained their scores together to estimate the average person’s optimism trajectory from age 26 to age 71.

We found that people tended to get more optimistic with age, peaking around age 55, followed by a slight decline afterwards. People in their 20s, 30s, and 40s, especially, could look forward to increased optimism in the years ahead. This finding is consistent with other research showing that older Americans living in the midwest became less optimistic around age 70, and that adult black Americans became more optimistic over time. Overall, people in America tend to become increasingly optimistic throughout early and middle adulthood, with their most optimistic years coming in middle age.

Keep in mind that this is the average trajectory. We also found that some people became less optimistic with age, some became much more optimistic, and some stayed about the same. This led us to ask an important follow-up question: what distinguishes these people from one another? Why does optimism change in different ways for different people?

Perhaps positive and negative life events are a major influence on optimism. After meeting the love of her life, having a wonderful child, and winning “best chili recipe” at the state fair, even the dourest pessimist might have to admit that she now looks forward to the future. Likewise, even the sunniest optimist might recalibrate downward after a series of major setbacks. 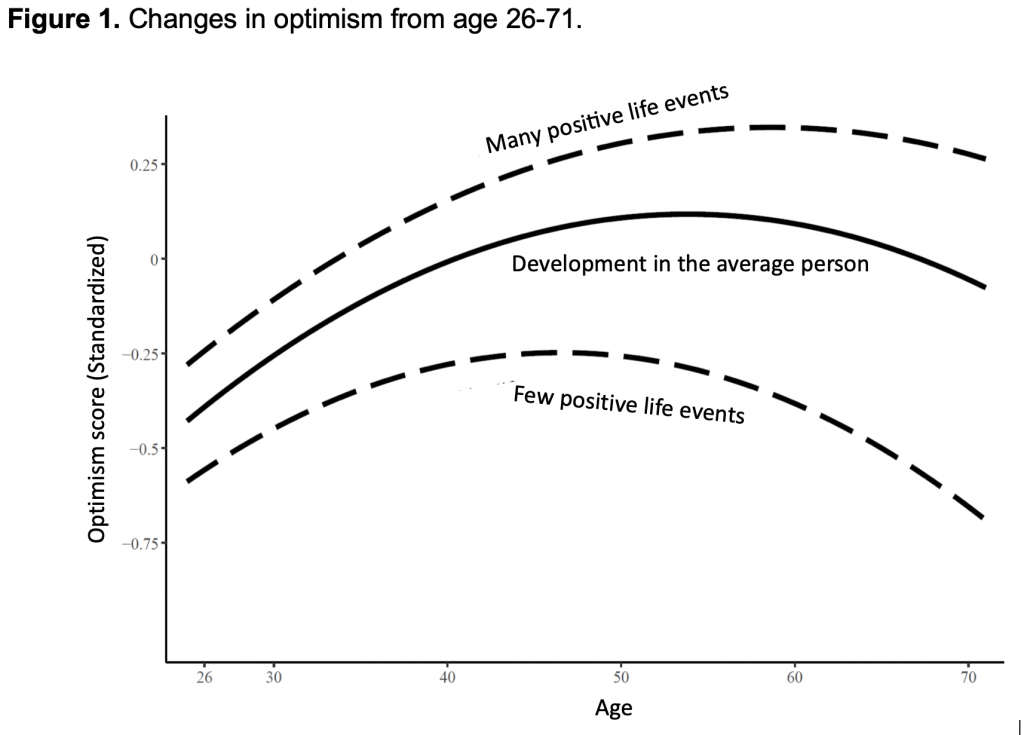 Why is this so? We believe that positive events and optimism may fuel one another in an uplifting cycle. People whose pasts are filled with positive happenings may expect good things to happen in the future, increasing their optimism. What continues to puzzle us is that negative events weren’t connected to decreases in optimism. Because this result is rather surprising, we plan to study whether it holds up in other samples of people before we draw a strong conclusion from it.

Researching these questions led us to wonder whether optimism development in younger generations will resemble what we found in the adult sample we studied. Which life events affect optimism most? Does the looming threat of global warming affect our optimism? While we begin to work on these questions, there’s a positive takeaway for younger adults who tend to see the glass as half empty: odds are that your glass will start looking fuller as you get older.

Ted Schwaba is a Ph.D. student in psychology at University of California, Davis. He studies how and why personality changes.