Unleash the Tongue: The Effect of Sex on Self-Disclosure

The sexual behavioral system evolved to motivate reproductive acts. The primary strategy for achieving this goal is to approach a potentially fertile partner, convince him or her to have sex, and engage in genital intercourse. However, human offspring are vulnerable throughout an exceptionally prolonged development period. Hence, in ancestral environments, sexual partners needed to stay together long enough to jointly care for their offspring during the period of maximum vulnerability, thereby increasing the offspring’s chances of survival and future reproductive success.

Over the course of human evolution, selection pressures have produced mechanisms that keep sexual partners attached to each other for an extended period, motivate them to remain in a committed relationship and engage in co-parenting behaviors following an offspring’s birth.1 Several characteristics of human sexuality suggest that the sexual system has been “exploited” by evolutionary processes to serve such a function.2 Humans, for example, tend to have sex in private and to sleep together afterwards. Humans also frequently have sex in the “missionary position”, which, by contrast to the typical sex positions of most mammals (e.g., canines), allows partners to maintain face-to-face contact during sexual intercourse. These and other similar behavioral tendencies foster extended close contact between sexual partners and make them feel more intimate with each other, thereby promoting enduring attachment bonds between them.

Although the literature suggests that sex contributes to attachment formation and maintenance, only a handful of studies have addressed the possibility that activation of the sexual system affects the motivation to engage in non-sexual relationship-promoting behaviors. A study3 published recently in Personality and Social Psychology Bulletin explored whether sexual priming would increase the use of strategies that foster relationship development. Three studies examined whether exposing people to sexual stimuli, implicitly or explicitly, would motivate them to reveal personal information to a prospective romantic partner, and whether this self-disclosure, in turn, would further increase their desire for future interactions with this person. In all studies, participants were exposed to sexual stimuli (vs. neutral ones) and instructed to self-disclose to an opposite-sex stranger who was presented as a potential romantic option.

In Study 1, heterosexual participants were subliminally exposed (i.e., outside of their awareness) to either sexual or neutral stimuli. Specifically, participants were told that in order to assess their compatibility with the other participant, they should indicate their food, clothing, and location preferences for a date with her or him. Then, they were asked to choose one of two options from each of seven categories (e.g., color of clothes: black or blue; location: bar or restaurant). Before each pair of options, participants were exposed to either a sexual (an attractive naked, reclining man shown from the groin up for female participants; an attractive, naked, kneeling woman photographed from behind for male participants) or a neutral prime, which was presented subliminally. Then, participants disclosed over Instant Messenger a personal event to an opposite-sex stranger. Judges and participants rated the extent to which personal information was revealed during the interaction. Results revealed that merely thinking about sex, even without being aware of it, encouraged self-disclosure.

Study 2 replicated these findings in relatively naturalistic conditions. Participants watched either an erotic (a scene from the movie "Original Sin" in which the actors Antonio Banderas and Angelina Jolie are having sexual intercourse) or a neutral movie about cats' behavior. Then, participants were asked to self-disclose an embarrassing personal event to another participant during face-to-face interaction. Study 3 set out to provide evidence that priming sexuality rather than priming relationships more broadly increases self-disclosure to an opposite-sex stranger and, in turn, the motivation to engage in relationship-initiation behaviors. To do so, participants watched videos depicting couples interacting either sexually or intimately but non-sexually and disclosed to an opposite-sex confederate over Instant Messenger an embarrassing personal event. Following this interaction, participants rated the extent to which they self-disclosed to the other participant and reported whether and where they would wish to spend a first date with him or her.

Overall, the findings indicate that activation of the sexual system encourages self-disclosure, a strategy that allows people to become closer to a potential partner. Self-disclosure, in turn, further increases the desire for this partner and fosters relationship development. Sharing of private aspects of the self with another individual is a well-documented way for adults to increase interpersonal intimacy and enhance relationship formation.4 The present research suggests that sexual activation facilitates this process, such that when two strangers meet, sexual interest will determine the extent to which personal information will be revealed during their interaction: Heightened sexual interest in a prospective partner is likely to increase self-disclosure, whereas a lack of sexual interest is likely to inhibit it.

Prof. Gurit Birnbaum works at the Baruch Ivcher School of Psychology, the Interdisciplinary Center (IDC) Herzliya (Israel).  Her research focuses on the underlying functions of sexual fantasies and on the convoluted role played by sexuality in the broader context of close relationships.

2Birnbaum, G. E., & Finkel, E. J. (2015). The magnetism that holds us together: Sexuality and relationship maintenance across relationship development. Current Opinion in Psychology, 1, 29-33. 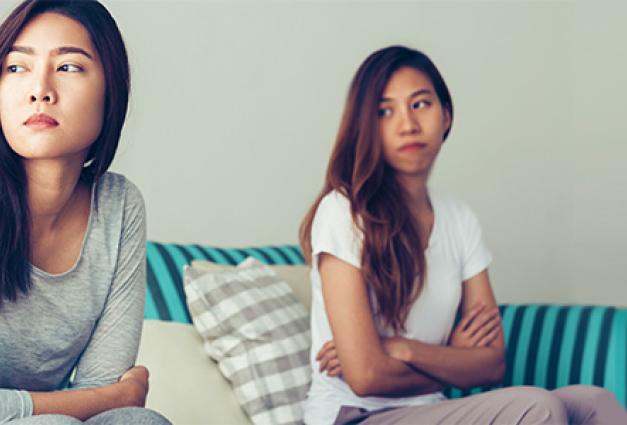 How Angry Do You Sound When You Are Irritated with Your Romantic Partner?

BY Sohyun Han
Your choice of words when you are irritated with your partner may reveal something deeper about your relationship and your past family experiences.
Character & Context Blog