Why Do People Stalk Their Partners Online?

Cyberstalking intimate partners is a bit of a grey area. In most cases, casually monitoring a partner online—such as, wondering “who is my partner’s new contact, Steven? I think I’ll check out Steven’s profile”—could be considered a relatively harmless behavior, just natural curiosity. However, more maladaptive behaviors, such as repeatedly checking your partner’s and Steven’s profile to be sure that their connection is innocent, approaches problematic cyberstalking.

Such problematic cyberstalking often occurs without the victim having any idea that their partner is monitoring their online activity. But, if the victim becomes aware that their partner is stalking them online, they may experience negative psychological, social, and physical effects. In some cases, the control and harassment associated with problematic cyberstalking an intimate partner can even approximate Intimate Partner Violence.

Curiously, cyberstalking has received much less attention from researchers than stalking that occurs offline. Furthermore, when exploring cyberstalking, researchers tend to focus on the person who experiences the stalking—the victim.  As a result, much more is known about the effects of cyberstalking on the victim than about why people cyberstalk in the first place. In our study, we explored the kinds of people who are most likely to cyberstalk their current or former partners.

To explore why people perpetrate intimate partner cyberstalking, we focused on the “Dark Tetrad” personality traits, which include the traits of narcissism, Machiavellianism, psychopathy, and sadism.

Briefly, trait narcissism can take one of two forms—grandiose narcissism (which involves  self-importance, entitlement, and superiority) and vulnerable narcissism (which involves  insecurity, inadequately, and negative emotionality). Machiavellianism involves manipulating and exploiting other people to get what one wants.  Psychopathy can take two forms—primary psychopathy (which involves callousness and shallow emotions) and secondary psychopathy (impulsivity and antisocial behaviour). Finally, people who are high in trait sadism enjoy harming other people (direct sadism) and enjoying watching others being hurt (vicarious sadism).

In our online study, more than 400 participants (76% of them women) completed measures of these personality traits and a measure that assessed how frequently they engaged in cyberstalking. For example, they rated how often they monitored their partner’s behaviors through social media, checked their partner’s messages (on e-mail, Facebook, or phone, for example) without them knowing, and used the location settings on their partner’s phone or computer to see where they’ve been.

Overall, people who scored higher in vulnerable narcissism, impulsive and antisocial forms of psychopathy, and sadism engaged in intimate partner cyberstalking more frequently.  In addition, women were more likely to engage in these covert forms of stalking than men were. However, when we looked at these personality traits for men and women separately, things got really interesting.

For men, only secondary psychopathy was significantly associated with cyberstalking intimate partners.  This finding suggests that, for men, cyberstalking intimate partners may be best explained as an impulsive, sensation-seeking behaviour.  Men may be drawn to the thrilling, taboo nature of secretly checking up on their current or former partners.

For women, though, only vulnerable narcissism and direct sadism were significantly associated with how often they cyberstalked their partners. For women, cyberstalking intimate partners may be explained by feelings of inadequacy and inferiority (vulnerable narcissism). Women who are highly sensitive to rejection may cyberstalk their partners in an effort to avoid rejection (“If I find out they are doing something wrong, I can dump them before they dump me”). The link between sadism and cyberstalking is also interesting. Although speculative, it is possible that rejection-sensitivity is paired with the desire to hurt their partner for the perceived rejection (“I’ll hurt them before they hurt me”).

These results signal the need to move away from the assumption that most stalking involves male perpetrators and female victims.  When it comes to covert stalking behaviours, such as online cyberstalking, women appear to be equally, if not more, likely to perpetrate such behaviors. Acknowledging that women also cyberstalk may help to reduce the stigma associated with men reporting and seeking support for being the victim of these behaviours.

Furthermore, these results have implications for managing problematic cyberstalking in close relationships. If we understand that men and women perpetrate these behaviours for different reasons, then we can apply this understanding to clinical settings such as relationship counseling and offender rehabilitation.

Evita March is a senior lecturer and researcher of psychology at Federation University Australia. Her research interests include interpersonal relationships, cyberpsychology, and personality, specifically, personality traits that predict perpetration of online antisocial behaviours. She is a member of the International Society for the Study of Individual Differences and is the founder of the Australasian Cyberpsychology Online Research Network (ACORN). 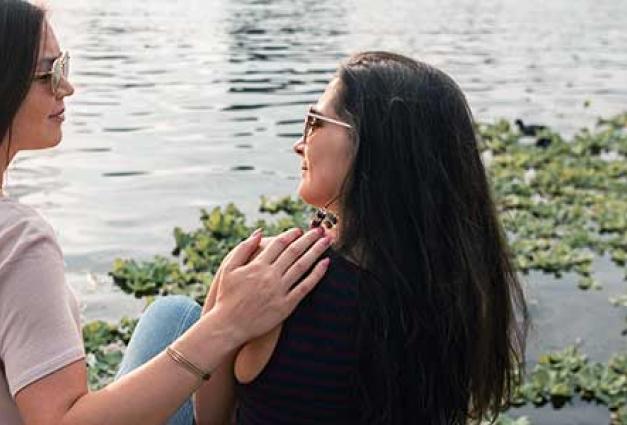 Even the People Most Reluctant to Touch Others Benefit From It

BY Anik Debrot
How people high in attachment avoidance miss out on the beneficial experience of touch.
Character & Context Blog