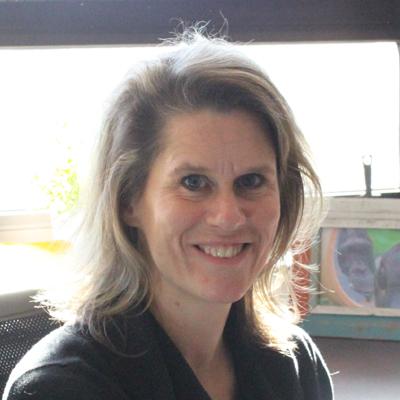 Sally Farley is an Associate Professor of Psychology and Program Director for the BA in Psychology at the University of Baltimore. She earned her Ph.D. from Virginia Commonwealth University, and has been a member of SPSP since 1998. Her research generally lies at the intersection between nonverbal communication and relationship science. She is primarily interested in the ways in which nonverbal behaviors (such as vocal cues, laughter, mimicry) function to create and maintain relational bonds. She recently conducted studies on the situational variability of vocal gaydar accuracy, the interplay between female laughter and male humor on perceptions of mating success, and the nonverbal consequences of social ostracism. One of her secondary lines of research explores the functions of gossip.

In my academic life, I define myself first and foremost as an experimental social psychologist. Being part of the premier social psychology organization is a natural extension of that.

Although this seems like very long ago indeed, there as a time when I was quite torn between pursuing doctoral study in counseling psychology, comparative psychology, and social (three seemingly very different areas of psychology!). I remember discussing this with my teaching mentor at East Carolina University, who remarked, “What could be more exciting than spending your career teaching others about studies like Milgram’s?” And I agreed! That was that. My lingering love for animals still creeps into my lectures (e.g. selective altruism of vervets, sexual selection in proboscis monkeys, brood parasitism of cuckoos), much to the joy (dismay? confusion?) of my students.

I am finalizing some projects that I have been working on for some time. One project has to do with the nonverbal consequences of social ostracism.  Specifically, we explored whether or not individuals cope with ostracism by increasing affiliative nonverbal behaviors in subsequent interactions, and whether this was moderated by in-group status. I am also in the process of writing a manuscript about situational influences on gaydar accuracy. In the coming months, I am excited to get back into my research on gossip (specifically, to test the social bonding hypothesis of gossip in an experimental setting), and to conduct research at the National Aquarium on environmental behavior change.

There have been too many to count!

For the last five years, Judy Hall and I have Co-Organized the Nonverbal Preconference for SPSP. This has been an unbelievably valuable experience, one that I would have never entertained without the opportunity from SPSP. The ability to network with such an amazing, warm, and talented group of scholars (Judy Hall, Frank Bernieri, Judee Burgoon, Tanya Chartrand, Nora Murphy, Miles Patterson, and Nick Rule, Marianne Schmid Mast, to name a few), has been the highlight of my career.

Find your passion and spend as much of your time exploring it as you can. It is a very exciting time to step into the field!

I enjoy adventure racing, trail running (slowly), playing the ukulele (poorly), and dancing (badly) in front of my family. I also spend an inordinate amount of time playing Two Dots and listening to irreverent comedy on Pandora.