Cognitive Map of the US Shows Importance of Ideology and Prosperity

In new research published by Social Psychological and Personality Science, researchers were able to model and study the cognitive map that US citizens have of the US states. Cognitive maps inform how people, on average, make sense of the world they live in. This cognitive map reveals that US citizens organize the US states according to not only geographical location (west-east) but also perceived ideology and prosperity.

An animation of the differences between the cognitive and geographical map is available here. 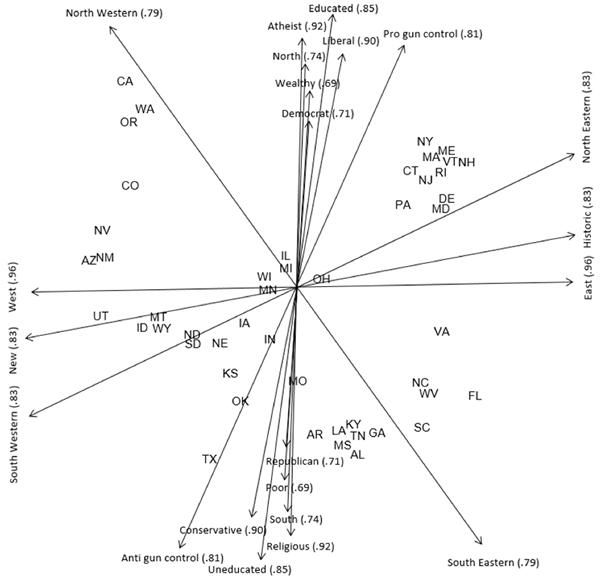 In three studies, data was collected from 1300+ US citizens from the 48 mainland US states. This allowed the researchers to compute and study two versions of the cognitive map. In the first study, respondents were provided with 48 cards on the screen, one for each US mainland state. They were asked to create piles of cards by lumping together similar states. In the second study, other respondents were asked to sort the states on the screen by dragging more similar states closer together. These methods allowed recording the perceived mean similarity of each pair of states. Mean pairwise similarity was then analyzed through multidimensional scaling, resulting in two cognitive map versions. The correspondence of the two versions was very high, showing the stability of the cognitive map across the two methods to measure perceived similarity.

Other US citizens suggested ~20 dimensions that might span the cognitive map, and more participants rated all states on all candidate dimensions. Results showed that the two dimensions that best described the states’ distribution in their 2D cognitive map were not west-east paired with south‑north (like in a geographical map) but west-east paired with the ideological dimension religious‑atheist. This suggests that religious-atheist played a greater role than south-north in participants’ same pile-assignment of similar states and different piles-assignment of dissimilar states (first study), and in participants’ close arrangement of similar states and far arrangement of dissimilar states (second study). In fact, the ideological dimensions religious-atheist and conservative-liberal, and the prosperity dimension uneducated-educated all explained perceived similarity better than south‑north (higher numbers in the parentheses in the map indicate higher explanatory value).

In a third study, respondents from the 48 mainland states estimated the liking of typical citizens’ from their state for typical citizens from the 48 states. Results showed that interstate distance on the cognitive map was a better explanation of estimated interstate liking than interstate distance on the geographical map of the US. This suggested that US citizens like citizens from states close to theirs not only in terms of west-east but also in terms of ideology (religious-atheist and conservative‑liberal) and prosperity (uneducated-educated).

The cognitive map of the US could become a useful tool for explaining and predicting political and economic interstate relations. For instance, the states' distribution in the map is not continuous but clustered, and the great gaps between clusters visualize the great divide between rather liberal and rather conservative states debated during the past few presidential elections. There is also a possible historical interpretation of this map as, on the east coast, there is a clear division between the former union and confederate states.

This press release shared courtesy of the authors and their institutions, University of Cologne, Louvain School of Management, Vrije Unviersiteit Brussel & Johannes-Gutenberg-Universität

Alex Koch is a post-doctoral researcher in the Social Cognition Center Cologne of the University of Cologne alex.s.koch@uni-koeln.com +49/221.470.7111

Nicolas Kervyn is professor of marketing at the Louvain School of Management (LSM, UCL) nicolas.o.kervyn@uclouvain.be +32/485.08.70.01

Matthieu Kervyn is professor of geography at the Vrije Unviersiteit Brussel