SPSP in Europe! A Fortnight in Wroclaw, Poland 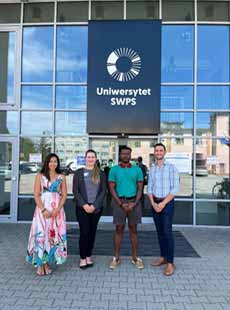 The summer school included five workshops: identity and politics, meanings in life, moral judgment and behaviour, social cognition, and intergroup relations. Each SPSP representative was assigned to one of the workshops, with workshops made of 13 students and two instructors. I was part of the intergroup relationship workshop. 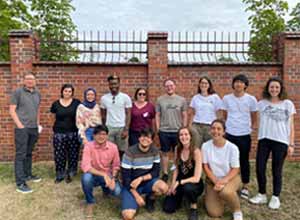 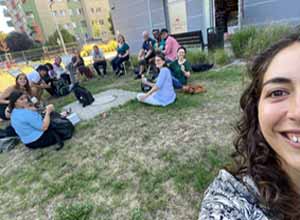 Intergroup relations workshop out for ice cream on the last day of summer school.

I was interested in the EASP summer school for a variety of reasons. First, the school was an opportunity to learn and share theoretical ideas with like-minded scholars while being mentored by experts. Secondly, I was keen to expand my academic network. Lastly, the summer school in Europe would implant me within Wroclaw—and by extension, a broader European setting and community, providing ample opportunities to broaden my perspectives and understanding of cultures both as an individual and a social psychologist in training outside of a North American context.

After the welcome ceremony and reception on July 24 at the Concordia Design, the cohort got the opportunity to network with fellow attendees and instructors from the different workshops. The summer school followed a regimented schedule. with workshops from 9 AM to 5 PM on weekdays. Structured social and volunteering opportunities occurred after 5 PM and on weekends. 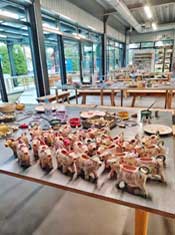 Painted cows at the live pottery museum in Boleslawiec.

More structured social activities occurred during the first week of school. First, there was the walking tour of the city. The fourth largest city in Poland, Wroclaw boasts many historical facts and is renowned for its picturesque town square. The international cohort then engaged in some sports in the intimate Grabiszynski Park. Further exploring the landscapes of Poland, we visited the live pottery museum in Boleslawiec. Polish ceramics are celebrated for their beauty and durability. We saw how enchanting everyday ceramics are made and built to withstand extreme temperatures. As a de-stressor from our regimented days and as a bonding activity, we questioningly painted ceramic cows. We were udderly confused as to why we specifically painted cows and not cups, saucers, or even foxes. This became a running joke of the summer school. 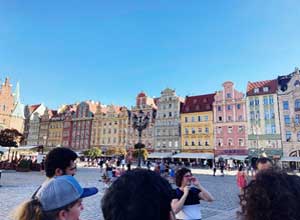 The cohort at Wroclaw Town square. 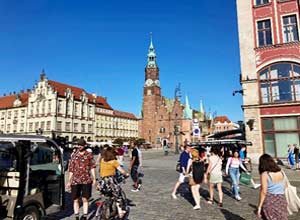 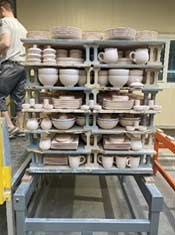 Pottery before and after being baked. 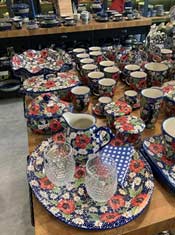 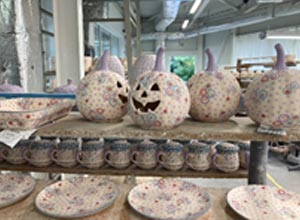 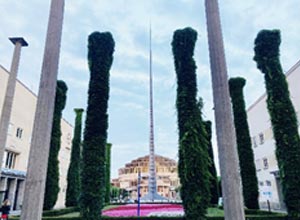 We continued our excursion by venturing deeper into the pastoral region of lower Silesia, at the base of the Kaczawskie Mountains. In this quaint village, we had a cohort joint meal at Villa Great—a 12th-century architectural farmhouse. The cohort also toured the Japanese Garden and watched the Wroclaw Multimedia Fountain. We were treated to a water fountain show accompanied by lights and an orchestra. We commemorated this awe-inducing experience by taking an EASP Summer School 2022 cohort portrait.

There were also opportunities for volunteerism. The cohort had meetings with Ukrainians who have been displaced because of the ongoing war with Russia. During these meetings, PhD students discussed a diverse range of topics as a cross-cultural learning experience. The Summer School also included a formal talk where Ukrainian academics spoke to the impact of the war on their well-being and research. On a somber note, they highlighted how younger academics—mostly PhD students—are being conscripted to join the army, and the grave implications of such conscription.

Developing an actionable research proposal was one of the goals for PhD students participating in the program. Each workshop, therefore, split up into research groups of 3 to 5. On the last day of the school, there was a showcase where research groups from the five workshops presented their proposals. This showcase allowed the cohort to learn about what others had been working on for the two weeks of summer school. 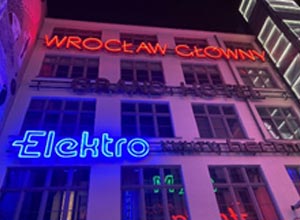 Night life on the last day of summer school.

After the closing ceremony, the cohort and instructors gathered at the cabana Za-zoo ("behind-the-zoo") overlooking the Odra River for a farewell party. Not only did we dance until the closing of Za-zoo as it rained, but we afterwards explored the nightlife of Wroclaw.

Representing SPSP at EASP's 2022 Summer School not only enabled social and professional connections, but it also exposed me to different experimental designs, and pedagogical philosophies. The fondest memories are the informal ones: if it was hearing seasoned instructors talk about the anxiety and imposter syndrome they experienced in graduate school, how my fellow German, Japanese, and French peers learned and still understand colonisation and structural oppression (the Holocaust, the war of Chinese people's resistance against Japanese aggression, the Algerian War respectively) over perogies, or the shared collegial "summer camp" feeling, returning from the town square at 2 AM and knowing we had to meaningfully contribute to workshop discussions in the morning, these memories are ladened with a sense of community.

I consider it an honor and an unforgettable perspective-broadening experience representing SPSP and learning from a well-rounded cohort and instructors. 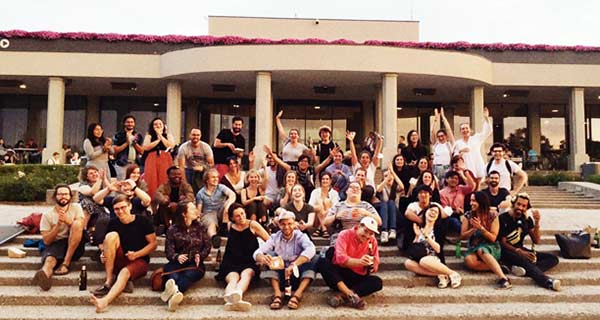 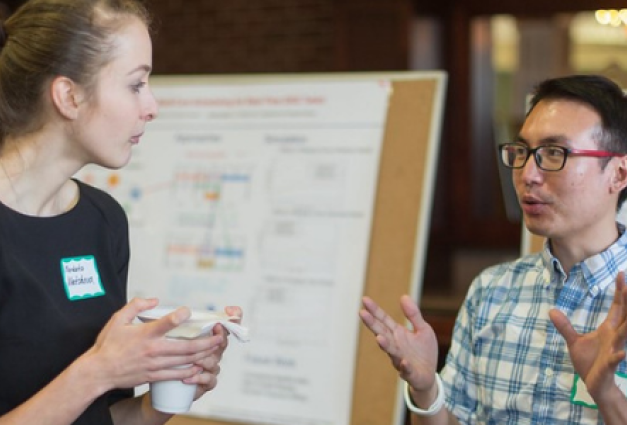 Presenting Your Poster at a Conference: Tips and Tricks

BY Sharlene Fernandes
This month, we share some tips and tricks for effective poster presentations.
Newsletter Articles 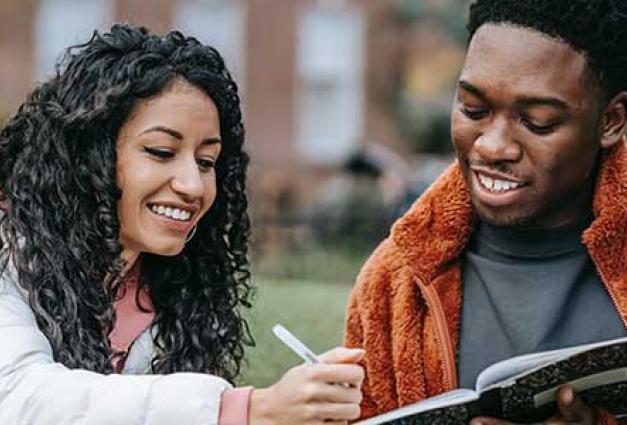 Mentoring Undergraduates as a Graduate Student

BY Sharlene Fernandes
At some point in their academic careers, many grad students will train or mentor their fellow undergrads. Though rife with challenges, these pairings are often beneficial to both the mentor and the mentee.
Newsletter Articles 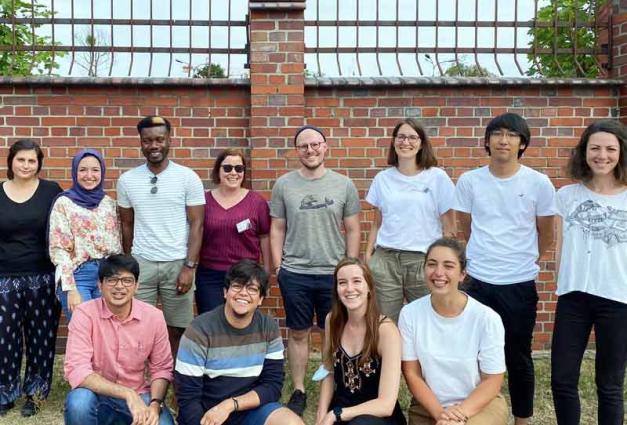 SPSP in Europe! A Fortnight in Wroclaw, Poland

BY Eugene Ofosu
Hear from five researchers who represented SPSP at the European Association of Social Psychology's 2022 Summer School in Poland.
Newsletter Articles