May 18, 2015 BY Calvin Lai
Share
You might not have realized it, but you could have racially discriminated against someone recently. Maybe you walked a little quicker when you saw a guy walking across the street from you. Or perhaps you were less friendly than you usually would be around a new co-worker. If you’re guilty of these subtle biases, you’re not alone.  A real-world audit study found that employers were 50% less likely to invite a job candidate for an interview if the name at the top of a person’s resumé was Black-sounding rather than White-sounding. Social psychologists have found that discriminatory acts like these are related to implicit thoughts that lie outside of conscious awareness or control. One study found that 68% of people who visit the website Project Implicit show implicit biases preferring Whites over Blacks, and another found that these implicit biases were predictive of hiring discrimination in real-world studies.
A pessimist might see these findings as evidence that implicit racial biases are inflexible and inevitable. If you rewind the clock back to the year 2000, that pessimist would be keeping up with the scientific literature at the time. The social psychologist John Bargh called this tendency towards bias the “cognitive monster,” stating that “Once a stereotype is so entrenched that it becomes activated automatically, there is really little that can be done to control its influence.” But in 2001, Nilanjana Dasgupta and Anthony Greenwald challenged this pessimistic view. They found that implicit racial biases could be reduced by showing people counter-stereotypical images of admired Black role models like Michael Jordan and universally reviled White people like Ted Bundy.
Over 600 experiments in the 14 years since have examined ways to change implicit biases1, discovering many other strategies for reducing implicit biases. But if a policymaker were to ask “Which interventions are best for reducing implicit racial biases?” most researchers wouldn’t have a firm answer. We know a lot about which interventions can work in isolation, but we don’t have a systematic understanding of which interventions are most effective.
The Research Contest
To figure out which approaches are most effective, we held a research contest. We contacted researchers from across social psychology and give them a challenge: Submit the intervention that you think would be most effective for reducing implicit racial preferences for Whites over Blacks.2 Research teams could propose any intervention they wanted, as long as it was under 5 minutes and deliverable online. In total, research teams submitted 18 interventions3 that were then tested against a baseline control condition over 4 studies with a total of 17,021 participants.
Most interventions were replications of approaches previously shown to be effective for reducing implicit bias; some were untested but based on prior promising research. These interventions fell into six categories:
Counterstereotypical Exemplars (5 interventions) - Having experiences with admired Blacks and reviled Whites.
Strategies to Overcome Bias (2 interventions) - Setting goals to override implicit biases once they’re activated. For example, setting the plan: “If I see a Black face, then I will think good!”
Evaluative Conditioning (2 interventions) - Playing “games” where participants see pairings of Black people with good things and White people with bad things.
Elevation (1 intervention) - Watching a video designed to induce moral elevation, an emotion experienced from witness acts of charity, gratitude or moral virtue.
Egalitarian Values (5 interventions) - Reflecting on one’s own egalitarian values. Examples included considering past and current injustices committed toward Blacks and reflecting on the importance of multiculturalism.
Engaging with Others’ Perspectives (3 interventions) - Taking the perspective of a Black person and imagining the world through their shoes. 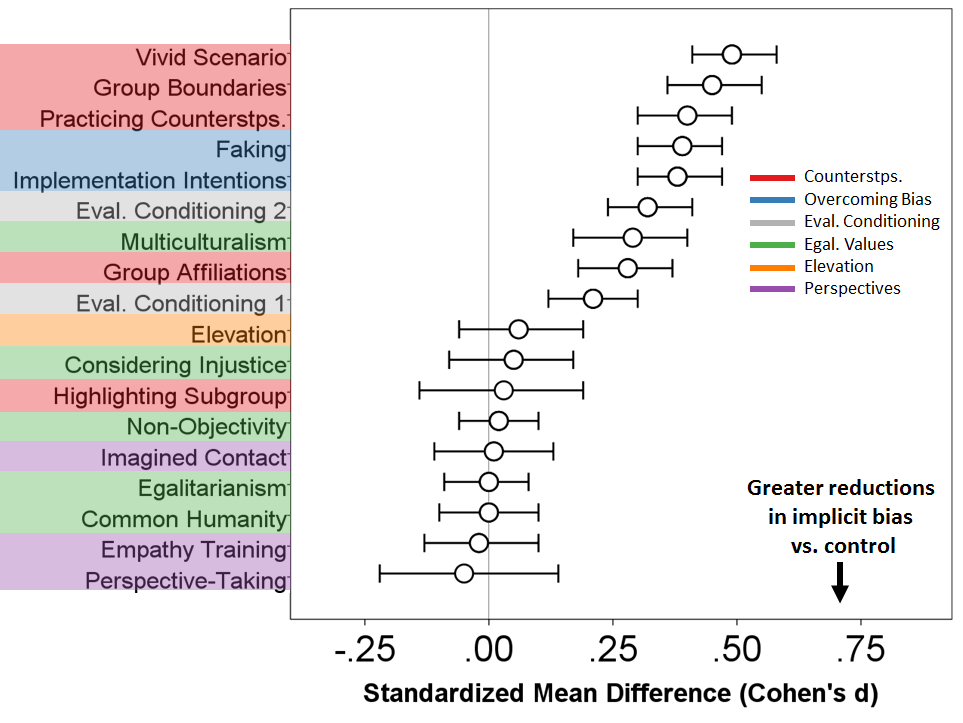 Circle = Summary effect, Bars = 95% confidence interval. For a detailed graph, see Lai et al. (2014).
What We Found
We found that nine of the eighteen interventions were effective at reducing implicit racial biases. What made the top nine interventions different from the bottom nine? One way to slice it is by examining what category an intervention fell under. The “winners” were Counterstereotypical Exemplars (4/5 successful), Evaluative Conditioning (2/2), and Strategies to Overcome Bias (2/2). The “losers” were Egalitarian Values (1/5), Engaging with Others’ Perspectives (0/3), and Moral Elevation (0/1). The most effective interventions were highly emotional, highly vivid, and highly self-relevant. For instance, the first place intervention was more than doubly effective than the ninth place intervention.  In the first place intervention (vivid scenario), people read an emotionally vivid story where they imagined being assaulted by a White man, only to be rescued by a Black man. In the ninth place intervention (evaluative conditioning), participants were flashed pairings of faces of White people with Bad words and Black people with good words.
What It Means
Implicit biases aren’t set in stone. They’re malleable, but not every attempt to change them is equally effective. Based on our contest, we find that interventions that aim to greatly reduce implicit racial biases provide people with counterstereotypical thoughts or strategies to override their implicit biases, and tend to be highly vivid and self-relevant.
Of course, the interventions in this contest were brief and assessed within one session only. The next tests will see how these interventions hold up under more difficult conditions. We’re looking at which interventions have the most durable effects, how the effectiveness of these interventions change as they’re scaled up, and whether these interventions lead to reductions in real-world discrimination. Put together, this work will create a bridge between basic research on implicit bias and practical applications for effecting social change.
Citation
Lai, C. K., Marini, M., Lehr, S. A., Cerruti, C., Shin, J. L., Joy-Gaba, J. A., Ho, A. K., Teachman, B. A., Wojcik, S. P., Koleva, S. P., Frazier, R. S., Heiphetz, L., Chen, E., Turner, R. N., Haidt, J., Kesebir, S., Hawkins, C. B., Schaefer, H. S., Rubichi, S., Sartori, G., Dial, C. M., Sriram, N., Banaji, M. R., & Nosek, B. A. (2014). Reducing implicit racial preferences: I. A comparative investigation of 17 interventions. Journal of Experimental Psychology: General, 143, 1765-1785. 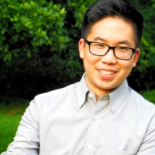 Calvin Lai completed his Ph. D. in Social Psychology from the University of Virginia in 2015 and will be a postdoc at Harvard University starting in Fall 2015. He is the Director of Research at Project Implicit, a multidisciplinary collaboration and non-profit for research and education in the social and behavioral sciences. His research seeks to discover the most effective approaches for reducing prejudice, stereotypes, and discrimination. You can visit his website here and reach him at clai@virginia.edu.